“The energy transition is not expensive, the problem is that we have started late as a society and now we need to accelerate”, Javier Ormazabal, President of Velatia 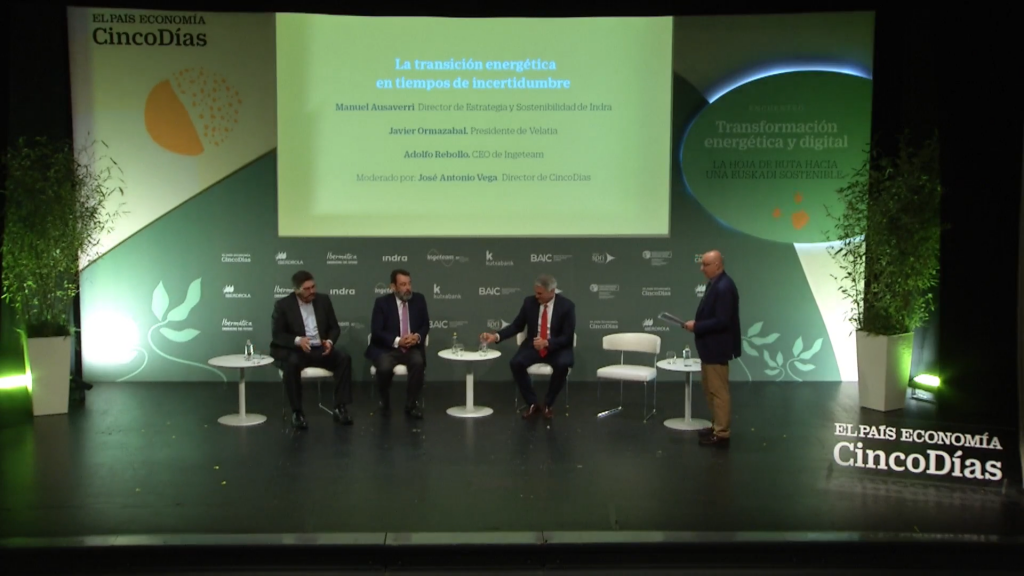 On 30 May, Javier Ormazabal, President of Velatia, together with other leading figures from the electricity sector, reviewed the challenge of the energy transition at the round table discussion “Energy transition in times of uncertainty”, organised by the Cinco Días business newspaper. During the talk, in which Manuel Ausaverri (Indra’s Director of Strategy and Sustainability) and Adolfo Rebollo (CEO of Ingeteam) took part, Velatia’s President highlighted the relevant role of the group within the “wave of electrification”, as well as the need for investment in electricity grids, whose “boost is essential for the development of the energy transition”. Furthermore, Javier Ormazabal added that this transition “is not expensive, but we have started late as a society”, something that has generated an “acceleration” and has contributed to a “higher cost”.

Referring to the socio-economic situation caused by the war in Ukraine, Javier Ormazabal pointed out that, in the first place, this has not “directly affected” the group, although he added that “it is true that when it affects our clients’ strategies, we are affected by it”. A situation that has been shown in “the pace at which we have to adapt to these new circumstances”, where “demand has increased in the short and medium term to meet the growth and development projects that are linked to the strategy of our customers, who request support for the growth and development of renewable energies”.

In addition, Javier Ormazabal analysed the situation of shortage of supplies and components facing the global economy, which has made it necessary “to adapt more quickly to guarantee a supply subject to other uncertain variables that occur at the same time”. However, this context, which “will not be resolved in a short time and requires us to re-engineer several things”, has served, in the words of the President of Velatia, to highlight “the improvement” in “the sense of collaboration of the environment, even at the regulatory level, to promote the challenge of decarbonisation and electrification of the economy”. An effort that “has been noticed at the level of customers, suppliers and public administration”.

On the other hand, the President of Velatia referred to the “enormous importance of talent”, which he described as “very difficult to obtain due to a demographic problem”. Furthermore, Javier Ormazabal emphasised the need for companies to “transfer veteran knowledge to the new generations” and the great challenge of “making the knowledge of companies available” in order to develop the talent of these people in a fertile social environment, “thanks to collaborative relationships with suppliers, clients and the regulatory environment”.

“The energy transition is not expensive, the problem is that we have started late as a society and now we need to accelerate”, Javier Ormazabal, President of Velatia