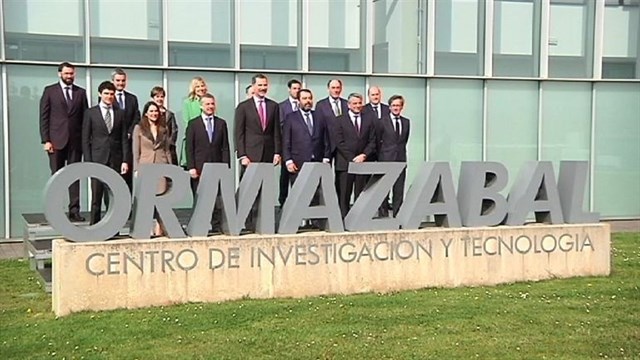 His Majesty King Felipe VI, accompanied by the President of the Basque Country, Iñigo Urkullu, and the First Minister of Bizkaia, Unai Rementería, were among the 300 guests who accompanied Javier Ormazabal Echevarría, President of Velatia, in celebrating the Velatia 50th anniversary

The event, held at the Group’s Research and Technology Centre in Boroa, included a visit by these institutional representatives to the facilities of the world’s most modern high power laboratory, which houses the only modern experimentation and demonstration unit in the world.After the visit to the facilities, during which the visitors learnt about the latest developments and research carried out by Velatia, H.M. King Felipe VI, accompanied by the President of Velatia, Javier Ormazabal Echevarría, signed cubicle number 1 million, the most characteristic product made by the Group in Bizkaia. Such a celebration for the Velatia 50th anniversary.

After the visit, Javier Ormazabal addressed all the guests and highlighted the Group’s values, recognizing and maintaining the spirit and vision of the founder and his father, Javier Ormazabal Ocerin. It was on 15 March 1967, exactly 50 years ago, when he launched a venture in which, as the President of Velatia noted in his speech “we have been fortunate enough to have the trust of financial institutions, suppliers and, above all, our customers.”

Thus, and looking to the legacy left by the founder, Javier Ormazabal Echevarría stated that “in Velatia we are looking to the future and see, like our founder, that there is still a lot to do,” reaffirming that “we must continue to adapt to changes that occur in the environment, for each customer, in sectors and society, strengthening our values and respecting the principles that have brought us here”.

Finally, and prior to unveiling a commemorative plaque, the President of Velatia concluded his speech with a look to the future: “let’s be like was our founder was: ambitious, nonconformist and committed”.