Javier Ormazabal, President of Velatia, participates in the inauguration of the Global Smart Grids Innovation Hub (GSGIH), promoted by Iberdrola and the Provincial Council of Bizkaia 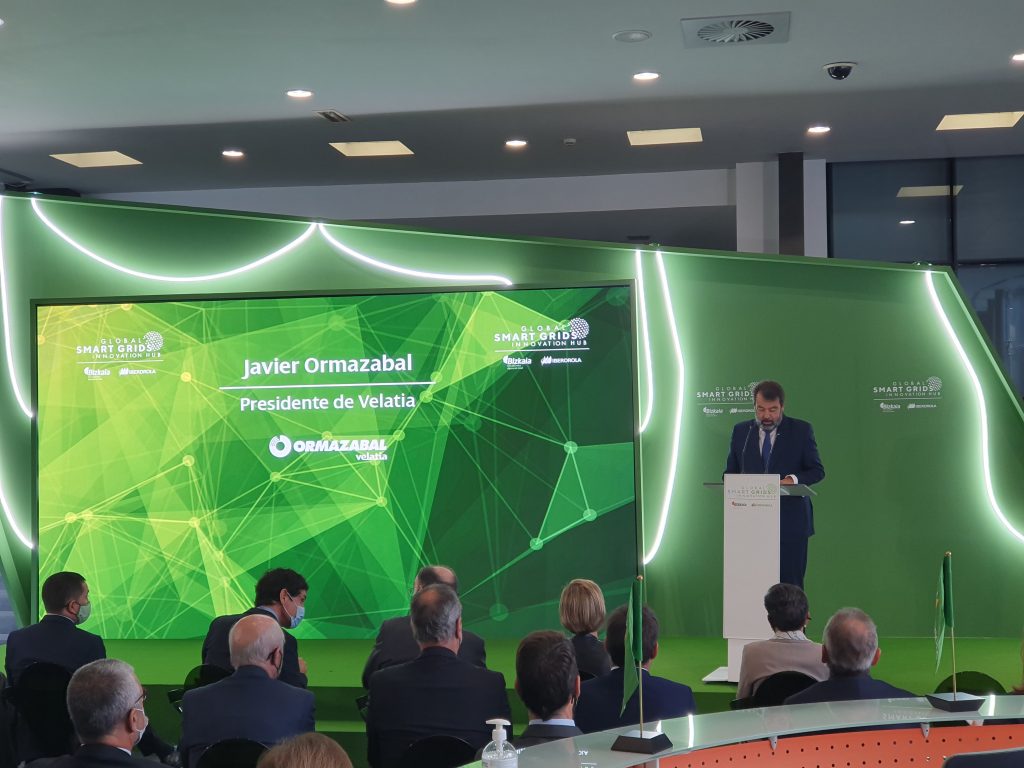 The President of Velatia, who attended the opening ceremony of this centre as a representative of the industrial companies collaborating with the GSGIH, highlighted the fundamental role of this hub for the development of Smart Grids

The new Global Smart Grids Innovation Hub (GSGIH) was inaugurated on Tuesday 5 October at Iberdrola’s facilities in Larraskitu, Bilbao. This international centre, whose aspiration is to become a global benchmark in the development and implementation of Smart Grids, will provide a response to the challenges of the energy transition. The initiative, promoted by Iberdrola and the Provincial Council of Bizkaia, has the industrial and technological support of numerous Basque companies, including Ormazabal.

The inauguration of the centre was attended by Ignacio Galán, President of Iberdrola; Unai Rementeria, President of the Provincial Council of Bizkaia; and Javier Ormazabal, President of Velatia. The latter, who attended as a representative of the different industrial and technological companies collaborating with the GSGIH, highlighted the value of “having a world leader such as Iberdrola, which shares its vision of the future and whose projects help industry to invest in talent and capital to be able to respond to these”. A strategy for the future in which Javier Ormazabal highlighted the collaborative role of the Provincial Council of Vizcaya, which has played a fundamental role in the creation of this centre.

With regard to the role of this new hub, the President of Velatia stressed that it will allow “to continue working and developing smart grids; as well as offering innovative products and services that are more efficient and better adapted to the needs of our customers and to society’s sustainable development objectives”. Furthermore, Javier Ormazabal highlighted the role of the Basque technology industry in the field of electricity grids, where it is “a benchmark in the design and deployment of Smart Grids at international level, with the presence of products and solutions in electricity grids in more than 150 countries”.

On the other hand, the President of Velatia, highlighted that the Global Smart Grids Innovation Hub will become “a pole of attraction for local and international talent, to follow the path of collaboration and co-creation already started in Bidelek”.

Iberdrola’s Global Smart Grids Innovation Hub is a global innovation and knowledge centre that aims to be a world benchmark in smart grids and will enable it to respond to the challenges of the energy transition. The centre will act as a driving force for innovation, combining the company’s technological capacity with that of its collaborators: suppliers, universities, technology centres and start-ups. It will also serve to attract strategic suppliers and international talent, thus strengthening the business ecosystem. The project has the fundamental backing of Iberdrola and the Provincial Council of Bizkaia.

With the creation of the Global Smart Grids Innovation Hub, Iberdrola aims to double the number of smart grid innovation projects, consolidating and expanding the current successful model of collaboration with electrical equipment manufacturers.

To this end, the company has already identified more than 120 projects for future development worth 110 million euros and has reached agreements with 30 technology partners for the development of grid digitalisation solutions, integration of renewables, deployment of electric vehicles and energy storage systems.

These projects are being structured through various working groups, which are made up of representatives of the main industrial companies in the area, such as Ormazabal.

Sustainability: more than a goal, a conviction

“We are an attractive destination for technology and industry professionals”, Luis Urkidi

“A good methodology helps you to break down the barrier of conservatism that your past success generates”, Javier Ormazabal

Sustainability: more than a goal, a conviction https://www.velatia.com/sustainability-more-than-a-goal-a-conviction

Data center, what is it and how does it work? https://velatianetworks.com/en/data-center-what-is-it-and-how-does-it-work/