Javier Ormazabal: “It is urgent to develop a policy aimed at improving industry’s contribution to our GDP” 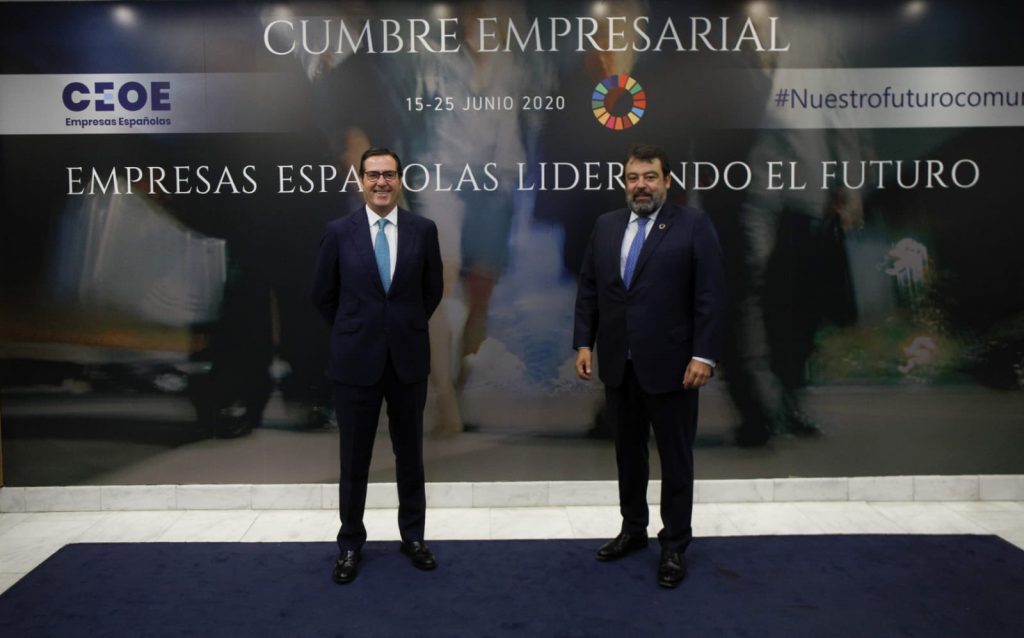 The President of Velatia used his speech on the third day of the summit ‘Spanish companies leading the future’, organised by the CEOE, to emphasise the important role of a policy based on innovation, technology and research in the industry

The President of Velatia, Javier Ormazabal Echevarria, used his speech yesterday, 17th June, on the third day of ‘Spanish companies leading the future’ summit of large businesses organised by the CEOE, which counted on the participation of the 130 top businesspeople in Spain, to stress the essential role played by an industry that is making an ever-increasing contribution to GDP. The aim of this meeting is to analyse the situation created by COVID-19, and to propose measures to reactivate the economy and lay the foundations for the future.

He also, from his position as President of the Basque Business Circle, offered his vision (“without any magic recipes”) for economic recovery based on five main pillars: committing to industry, restoring stability, increasing social dialogue, promoting energy transition, and consolidating digitalisation.

Industry as the driving force behind economic growth

“It is urgent to develop a policy aimed at increasing the current 14% that industry contributes to our GDP, first taking it up to the European average and from there looking to reach 20%, based always on industrial competitiveness through innovation, technology and research,” Javier Ormazabal told attendees at the conference, which included the chairmen of Cosentino (Francisco Martínez Cosentino), Feique (Carles Navarro), Alibérico (Clemente González Soler), Acerinox (Bernardo Velázquez), Ence (Ignacio Colmenares) and the head of Confemetal employers’ association, José Miguel Guerrero.

Javier Ormazabal wanted to stress that, despite the difficulties deriving from the COVID-19 pandemic, 2020 “could be a great year; the year everything changed; the year we do incredible things together”. He then went on to state that “the future can be better than our recent past if we put aside our differences and overcome the difficulties together. Social actors, trade unions, employers, government and political forces must work together to overcome this crisis”.

The President of Velatia used this third day of the summit, focused on automotive, industry and food, to stress the importance of “a stable, coordinated fiscal policy among administrations in order to promote investment, along with business strategies that meet the United Nations’ Sustainable Development Goals”.

During his speech, the President of Velatia stressed the challenge and opportunity that energy transition, embodied in the European Green Deal, represents for Spanish and European society. “Energy transition is neither a whim nor a fad, but rather a necessity based on the commitment made by the vast majority of countries to combat the inexorable challenge of climate change. This challenge cannot wait, and can become a driving force for economic revival,” he said.

Indeed, in the words of Javier Ormazabal, “moving towards a clean energy model means electrifying the economy, since electricity is undoubtedly the energy vector most capable of integrating renewable generation sources”.

Equally important as energy transition is the contribution that a digitalised economy can make to society on all levels, a need that “confinement and safety measures have clearly shown us”. Indeed, “as a country, we must commit to digitalisation in order to be competitive, develop high-added value products and services, and generate quality employment,” said Javier Ormazabal.

Find the full speech at the following link:

What path does electricity take from generation to consumption? https://velatianetworks.com/en/what-path-does-electricity-take-from-generation-to-consumption/